The Last Fight of Virgo Season

As the final days of this earthy season come to a close, we saw hard work and consistency pay off for fighters in their bouts, a couple of close decisions via the judges, but much like Virgo season itself, nothing that wasn’t mostly predictable. This Saturday marks our last fight of this ambitious and stable MMA Astrology month before we enter a significantly less consistent season with Libra, our favorite air-ruled time in which going with the flow, spontaneity, and likely a couple of upsets are bound to occur. The interesting thing about the fights on tonight’s card however is the number of fighters who have placements and aspects interacting with the current transiting Mars in Aries, which also happens to be in retrograde.

Coming into this fight Tyron has been on a two-fight losing streak putting him as the underdog against Colby, and while at first, I was a bit anxious to look at his chart, I am surprisingly impressed with his placements. The most positive and relevant being the transiting Mars in Aries as mentioned early, with Tyron’s natal Mars being placed in Libra we have the perfect example of air and fire feeding off of each other.

This transition has its strongest effect on Woodley starting in July and through the end of October, notably after his last loss and when the fight for him and Colby was likely in talks considering it was announced late August. The implication of this aspect revolves around the focus and growth of oneself with a lot of outward-directed energy, and a tendency to dominate others. We also see the transiting Jupiter square his natal Sun, feelings of optimism, and reevaluating the faith he has in bringing his goals into reality are present, it’s also possible he might begin a new and significant journey at this time.

On the other hand with Colby who has a very water-dominated chart with some precarious earth placements particularly in his Mars and Saturn we see an almost opposite effect for him. Pride is brought into focus, and being preoccupied with material well-being. It is however paired with the transiting Sun being square his natal Mars, giving him heightened energy and assertiveness that can translate into becoming contentious with people.

Now the transiting Sun also happens to be square his Natal Jupiter in Aries, making him more aware of limitations, and examining the structure of his life and his ego investment in that structure. Transiting Mercury is trine natal Chiron also implies exposing deep-seated pain and a journey of discovery.

My Pick: I lean towards Tyron in this one. While the odds are against him, it feels as though the stars themselves are looking out for him tonight. Or at least giving him a strong nudge.

On a four-fight losing streak Cerrone may be seeing a light at the end of the tunnel tonight, whether that be from getting knocked out or from redemption is entirely up to him, however. The transiting Jupiter in Capricorn is a beacon of optimism and has the potential to reap rewards associated with the career. With it also being square his natal Moon we see that optimism and possibility translates into self-confidence and sureness of self and culminate in what is potentially a very important moment for him.

This is boosted by the transiting Mars being conjunct with his natal Mars giving off vibrant and abundant energy, assertiveness, and an aggressive urge he’s likely to translate into the octagon. With both Jupiter and Mars in retrograde and their aspects to his natal placements, I think we might see an overall renewed and fresh-faced Cowboy, looking to just have some fun in the ring and not letting little things trip him up on the way.

A beautiful Libra after my own heart, Price has a very air-heavy chart that may not bode so well in face of the current transiting planets. Particularly concerning his Chiron. Transiting Jupiter being in opposition to his natal Chiron in Cancer implies painful experiences and his broad intellectual framework potentially going through a rough but needed re-examination. This may result in a much-needed new outlook on life, and potentially a career.

The transiting Mars is quintile his natal Jupiter and for this week or so long transit, a large boost in energy and renewed optimism and clarity may illuminate more of his purpose besides just ego gratification. This implies some success or productivity toward long-term goals. Whether that translates to immediate success in current goals or rather a loss to give him a reason to go back to the drawing board resulting in more long-term productivity in his goals is yet to be determined.

My Pick: This one is hard, but I personally lean toward Cerrone here. My Libra heart is hoping for a Niko Price win, and I think he certainly has the potential for it, however, it seems Cerrone’s chart simply has more heat and immediate goal success.

There’s definitely a lot going on with Johnny’s chart, but most notably is a lot of action with his Chiron, speaking to growth, understanding past wounds, and healing from them to become a more whole person leading to accomplishment. With the transiting Moon being square his Natal Chiron symbolism of suffering, transformation and healing come to the forefront, and with him moving camps around, and finding footing in Ireland, and rebranding himself a bit from the wild kid who dislocated his shoulder celebrating, I think we may see a renewed Johnny Walker tomorrow, back on track to be a problem for the division’s elite. The transiting Moon becomes trine his natal Mars giving us ego assertion, initiative, imposing will, and a focus on self and pushing forward. We also see the transiting Jupiter semi-square his natal Mars, expanding his assertiveness and animal passion, a renewed sense of optimism, and greater clarity of purpose. Activities he’s involved in during this transit are likely to produce long-term results.

Spann is also coming into this fight with great astrological placements, this is not without some caveats, however. While transiting Jupiter is in Virgo giving him great vitality and increased confidence, it can also imply errors in judgment and excessive egotism. The transiting Saturn is also trine his natal Mars, and for a brief period of time his ability to get things done may have slowed down, a subconscious need for recognization resulting in just gritting teeth and moving forward despite any setbacks. Many of us are feeling the shift in perspective related to Saturn’s retrograde cycle starting in June that will last through December, and for Span, with his airy Aquarius he might be finding his path to self-realization blocked, and a subconscious need for recognition, career and development opportunities becoming available to him but finding success in them may be difficult.

My Pick: I lean towards Johnny on this one. I do feel as though it can go either way, and both have strong aspects in play for them. This has the potential to be a fight of the night based purely on astrology.

I bet you thought only Mercury could go in retrograde am I right? Retrograde motion actually refers to an apparent (but not real) change in motion of a planet through the sky. The actual movement has not changed but due to the relative positions of the planets, Earth, and how they are moving around the Sun it can appear as though a planet may be moving backward in its orbit. Just as our perception of the planets becomes skewed, so can the way we see things within ourselves- retrograde is about the intrapersonal examination.

Mars retrograde in particular requires us to reassess our approach to achieving success in what we want, our projects, and even our desires. Understanding that previous impulsive reaction may have worked sometimes but is not always fruitful and can cause unwanted results. The reason I find this particularly interesting in this card is since Mars’ retrograde station is still within Aries, a planet it rules, amplifying that aggression, passion, and spontaneous type energy it so well known for. This amplified, renewed, and reevaluating energy heavily influencing those fighters with Aries in their chart may be a key to some upset victories we weren’t necessarily expecting.

As always I will be placing a parlay on my picks listed above, with a couple of additional separate bets based on the astrology of the other fights not mentioned. This includes a three-way parlay on Stewart, Meerschaert, and Woodley, and Stewart, Walker, and Woodley. My max bet pick leans towards Tyron, but to be honest, I am pretty bias in this choice, but the astrology for him looks strong.

I don’t know about you but I’m taking advice from one of my favorite podcasts WHOACAST and calling on the Ancestors to pull through for him tonight. 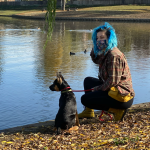